Today, I want to write a few words about another of my older projects. 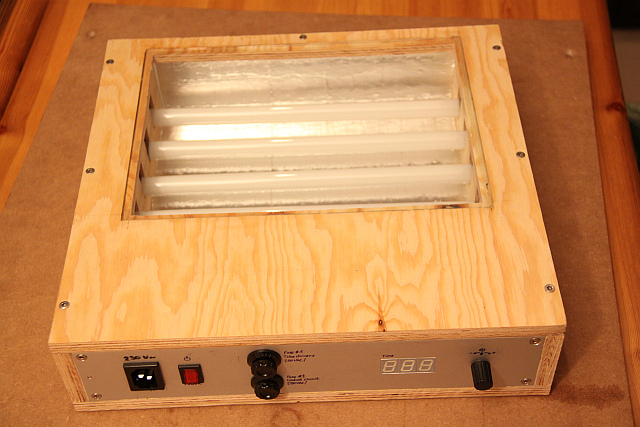 A while ago, I started building this DIY UV exposure box. The electrical part consists of a self-designed count-down timer based on an AVR Tiny2313 CPU, 4x8W PHILIPS UV tubes, ignition/driver circuits from cheap fluorescent bulbs, a multiplexed numeric LED display, a rotary encoder and some wiring. A piece of ~4mm aluminum serves as a faceplate, picture frame glass as the exposure surface. We’ll have a look inside in a moment.

When turned on, the controller presents the configuration menu first. All options are preset – or should I say ‘preprogrammed’ because the preset cannot be changed, as of yet – to the values I use most frequently. Configuration includes the time (up to 9min 59sec), a variable tube preheat time up to 59 seconds and a zone selection. The zone selection does nothing at the moment, but the pcb features a mounting spot for a second solid state relais which I have not yet installed. Which means, all four tubes are activated.

Press the selector one more time and the process starts. To stop again, either press the button again, switch off the mains or wait patiently until the time runs out.

Now, on to the inner values. After undoing 7 torx screws, the lid can be removed to access the elecronics compartment behind the front panel:

Inside the compartment is the four-fold ballast circuit, which consists of four board found in the sockets of fluorescent energy saving lights. These are pretty cheap compared to commercial electronic or inductive ballasts and they can be used right as they come. The only crucial number is the power rating – my tubes are rated for 8W while the ballasts came from 9W bulbs, which works just fine. Care has to be taken when opening the sockets, though. The bulbs should be left lying around for some time prior to “dissection” because they contain a pretty juicy capacitor. The circuit inside is basically a simple switchmode current supply. When that’s done, an easy way is to cut them open along the circumfence about in the middle of the socket’s height with a fine saw blade. Don’t cut too deep or you will damage the pcb. Once the casing is open, mark the pairs of wires coming from each end of the tube before cutting them. These pairs need to go to the ends of the UV tube, don’t mix them up or you’ll short out the circuit. How the two wires connect to the two pins of the tube on each side is completely up to your choice, though.

As always, remember the hazards involved when dealing with mains equipment, especially such that was never designed to be opened or even run in the open. Also, don’t go breaking any fluorescent tubes as they might contain traces of mercury.

The four ballasts are wired in parallel to the mains, with just a fuse, the power switch and a solid state relais in series. Fuse-wiring got a little complicated because I forgot to place separate fuse sockets for controller and drivers onto the pcb, but nothing dangerous here. A connection between faceplate and protective earth is also present for safety reasons, seeing that there is lots of live wiring very near. You may have noticed the absence of any cooling fan or holes – these are not necessary as the device is run for a few minutes at a time and never unobserved. The ballast circuits are designed for operation in a very tight unventilated space anyways, so no trouble to that end. After ~5 minutes of exposure the glass surface becomes just noticeably warm.

To the right is the control circuit, consisting of said ATTiny2313, a small 6VA transformer-powered 5V supply, the solid state relais (SHARP S202S02) and three npn transistors as segment drivers for the LED display. I still have some pictures from back when I made the pcb (about a year ago now):

I have used this exposure box several times now and am pretty content with the results. There still remains some creepage of light between the layout print and the photosensitive layer, resulting in fuzzy edges of traces and larger groundplanes sprinkled with small holes. This is partly thanks to an absolutely ridiculous laser printer made by HP (Color LaserJet 2600nse). No matter what settings are used (even in the expert options), the printer will never do dense black withing planes and very often blur traces on either the leading or trailing edge. Text works fine, though.

You may download the schematics in Eagle 6 format at your leisure. I do not guarantee correctness of the layout, though. There was a small problem in an earlier version (Pin 1 of ribbon cable connector was not connected to ground) which I have fixed now.

I do not take any responsibility for whatever happens to you. It’s up to you to decide if you want to and are able to build something like this.

* NOTE: Make sure that pin 1 of the front panel connector is really connected to ground, the traces were etched away in my case. The result is erratic behaviour of the rotary encoder.